Urban Greening Plans (UGP) are taking Europe by storm as a tangible and actionable strategy for both mitigating and adapting to environmental challenges by improving air quality, storing carbon, supporting biodiversity, and reducing temperatures. UGPs are an opportunity to mainstream nature-based solutions (NBS) by explicitly and intentionally integrating biodiversity-enhancing practices and structures into legally binding urban plans and policies.

Due to the potential for UGPs to vastly improve the quality of life in urban centers while concurrently reducing human impact on the environment, the European Commission has made UGPs a core component of the Biodiversity Strategy for 2030. The strategy calls on European Cities with populations larger than 20,000 to develop a UGP that supports the achievement of ambitious environmental targets.

Belgrade, a CLEVER Cities fellow city and seat of UrbanByNature South Eastern Europe, offers an exemplary model for cities tasked with drafting a UGP. With support from ICLEI and local experts such as the Centre for Experiments in Urban Studies (CEUS), Belgrade has created a UGP for a Linear Park  along a former railway corridor in the urban municipalities of Stari Grad and Palilua. The park will stretch from the Beton Hala along the Danube to the Pancevo Bridge.

Image by CEUS, sourced from: bellab.rs

The development process was driven by co-creation, and is a promising pilot for NBS integration in a Serbian context. The process began In 2019 with a survey for local residents on urban nature. 570 residents responded, clearly indicating a desire for more pristine natural areas in the city. The survey provided essential input for participants in a subsequent landscape architecture design contest. The city created the competition in order to foster creative and innovative sustainable infrastructure and to invest in Belgrade’s future architectural leaders.

In total, 28 teams (127 people) submitted proposals for the Linear Park. 10 outstanding teams were invited to submit more detailed proposals, which formed the basis of the city’s official strategy for the area. The proposed UGP was finalized after undergoing public comment. Community feedback was integrated into the plan, and it was passed in its current form in August of 2021.

The resulting Linear Park is designed to improve the microclimate within the park, support biodiversity, and ensure co-benefits for public health and resident well-being. This will be achieved through the creation of a continuous ecological corridor that is planted with vegetation suited to different layers of an urban forest: flowers (forest floor), shrubs (understory), and trees (canopy). It is hoped that redeveloping, connecting, and celebrating public urban green space will facilitate more direct contact between residents and the environment, leading to a love of nature becoming a part of Belgrade’s urban identity.

The impact of the UGP extends beyond the park itself– novel for Belgrade, the plan listed green roofs and green walls as obligatory elements of any new construction adjacent to the park. These changes are worthy of celebration and are expected to have a positive impact on business opportunities in the area. Construction on the Linear Park began in 2022. 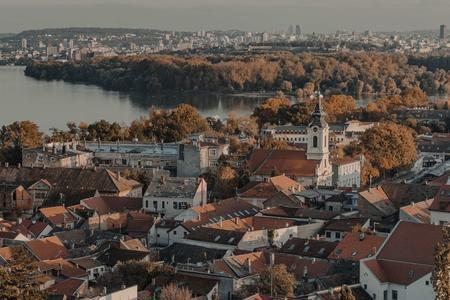 In collaboration with the City of Belgrade, the ICLEI World Secretariat, ICLEI Europe...